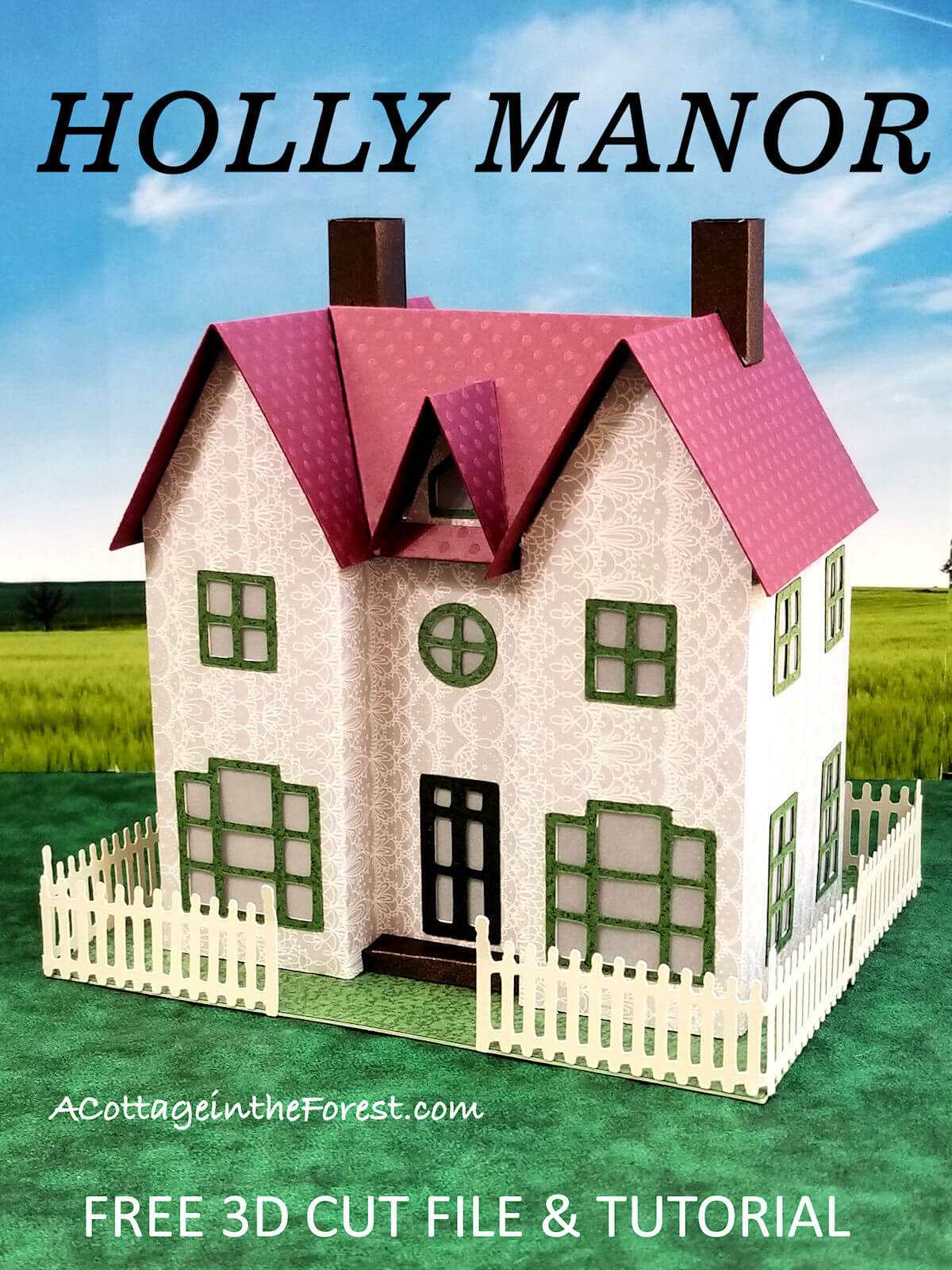 In October my friend Hollie opened a craft boutique locally where she sells my kits on commission. We quickly realized that, unlike on Etsy where my intermediate and advanced kits sell best, the people coming into the store are usually first time Putz-style house builders. Hollie has asked me to design at least two more beginner kits for the store. Holly Manor is the first of these. And yes, I did name it after her – with a twist on the spelling – since she requested the design.

END_OF_DOCUMENT_TOKEN_TO_BE_REPLACED 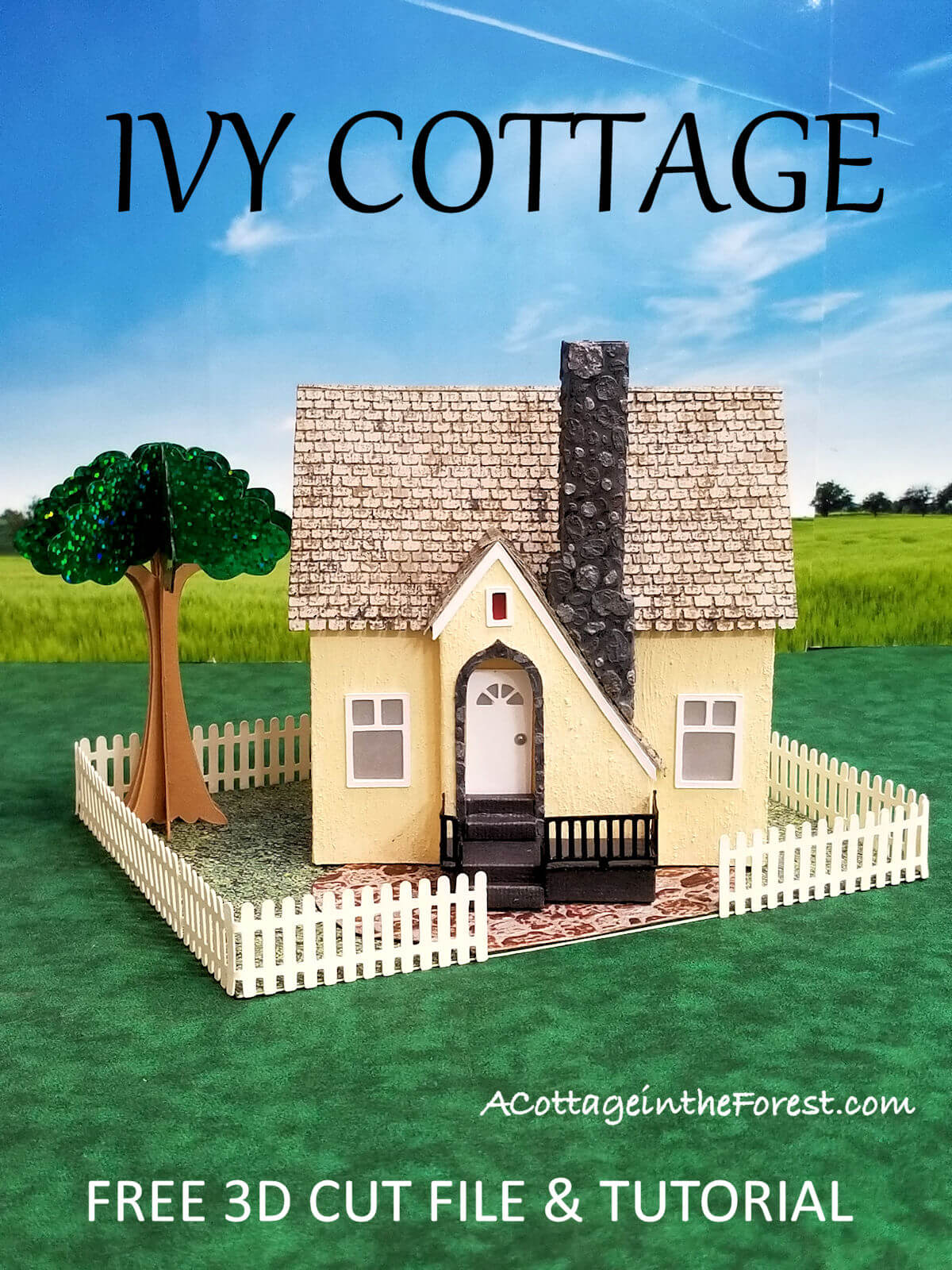 I have finally finished a pattern for a new house! I know you were probably expecting something Halloween-themed since it is October, and I had so many ideas before I broke my arm, but it seems sort of late for them now. I shall save them for next year. I had been working on this pattern before I broke my arm and really wanted to finish it. The front was the basis for a favorite custom house that I made last year.

END_OF_DOCUMENT_TOKEN_TO_BE_REPLACED 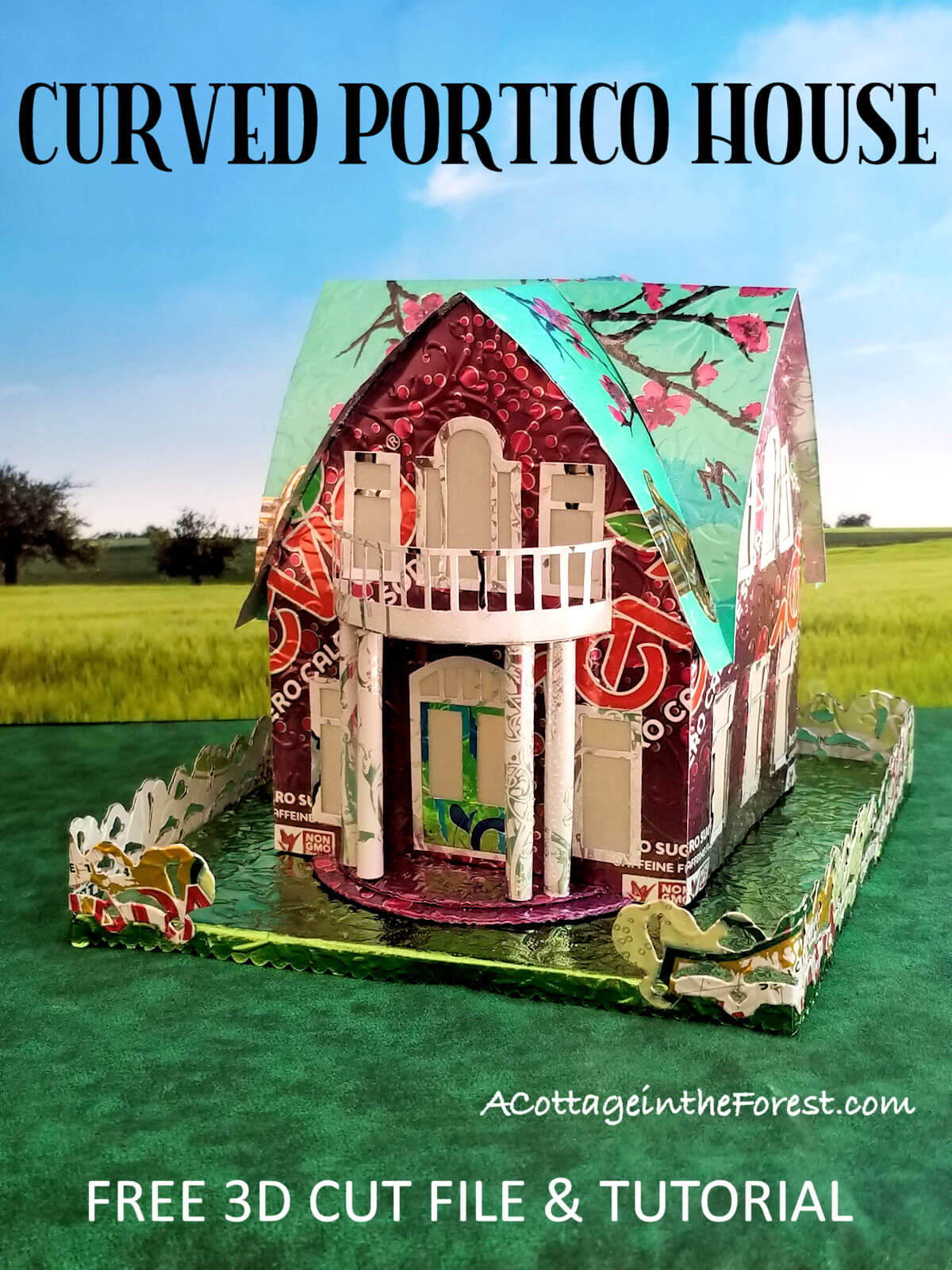 As I have slowly been making my way through Steven Leeds’ Glitterhouses, converting them from PDFs to SVGs, some of the patterns have been calling me to flesh them out with window frames, doors, or other small changes. But when I got to Glitterhouse #12, a complete yet altered picture of the house flashed into my mind. I actually had to hold myself back from making the changes to Steven’s files right then, and instead published them as he had envisioned the house. Then I set to work making the SVGs of the house as I had visualized it.

END_OF_DOCUMENT_TOKEN_TO_BE_REPLACED 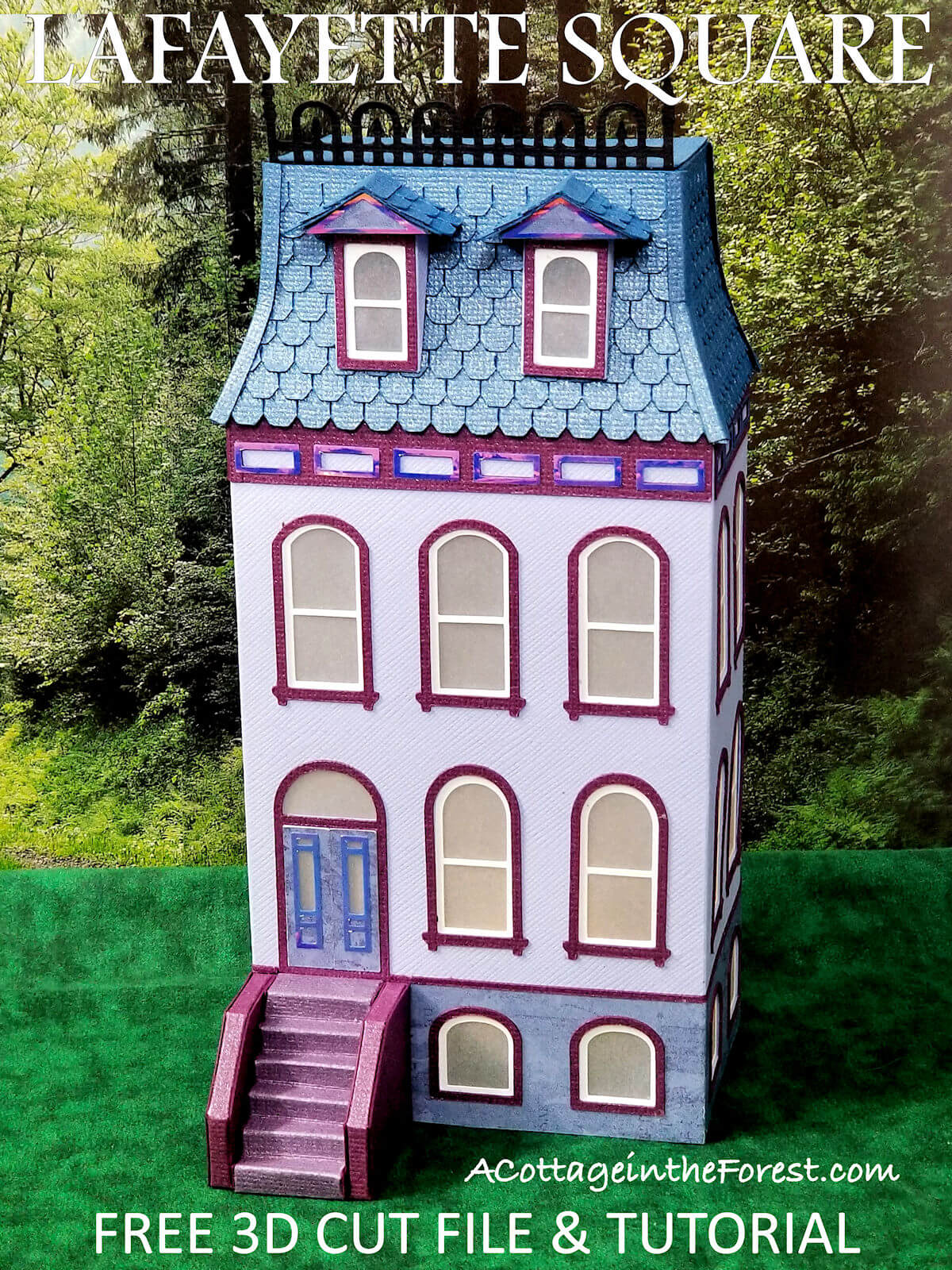 I am so excited about this post! This week I am honored to be able to share the pattern for Meg Danforth’s Lafayette Square.

What is so exciting this time is that 1) it’s a Victorian, which are always my favorite, 2) Meg makes gorgeously detailed buildings, and 3) Meg is a ringer with Inkscape and makes her own SVGs! Plus Meg has done all of the hard work of sizing the pattern to fit with the Tim Holtz Village dies.

If you would like to be a guest designer Just reach out to me to work out the details. While finished SVGs make me extra happy, I would also be willing to convert PDFs or (gulp) – hand drawn patterns. Those take me the longest to make and share, however! My main requirement is that you allow me to share the finished files for free on my blog for a minimum of a month.

END_OF_DOCUMENT_TOKEN_TO_BE_REPLACED It’s been a while since I did a make-along of another designer’s building, but with Easter fast approaching I wanted to remake a cottage I had made once before that is just perfect for the holiday, the Spring Egg-Centric House by Sandy Stark of Simply Crafty SVGs. This one does require purchase of the pattern, but it is so unique, and so perfect for Easter, it is well worth it.

Sandy makes a wide variety of different SVGs, not just houses. One of them is a gypsy caravan, a Vardo, that I am just itching to make next.

END_OF_DOCUMENT_TOKEN_TO_BE_REPLACED Recently, I received an order for another custom aluminum can house based upon a real house. This one ended up being a real challenge, not only because I had never designed a Mid-Century Modern house before, but because the buyer only sent me one skewed picture of the front of the house. The buyer told me to put it in a winter setting and use my imagination to fill in the back.

I let my imagination run wild on the back, and thus the back of the house has the big windows that are common on Mid-Century Modern houses. For this reason, I expect as many people will want to display the back of the house as the front. I am not providing a Putz back with a hole in it in my pattern. This house really wants to be lit from the bottom!

END_OF_DOCUMENT_TOKEN_TO_BE_REPLACED 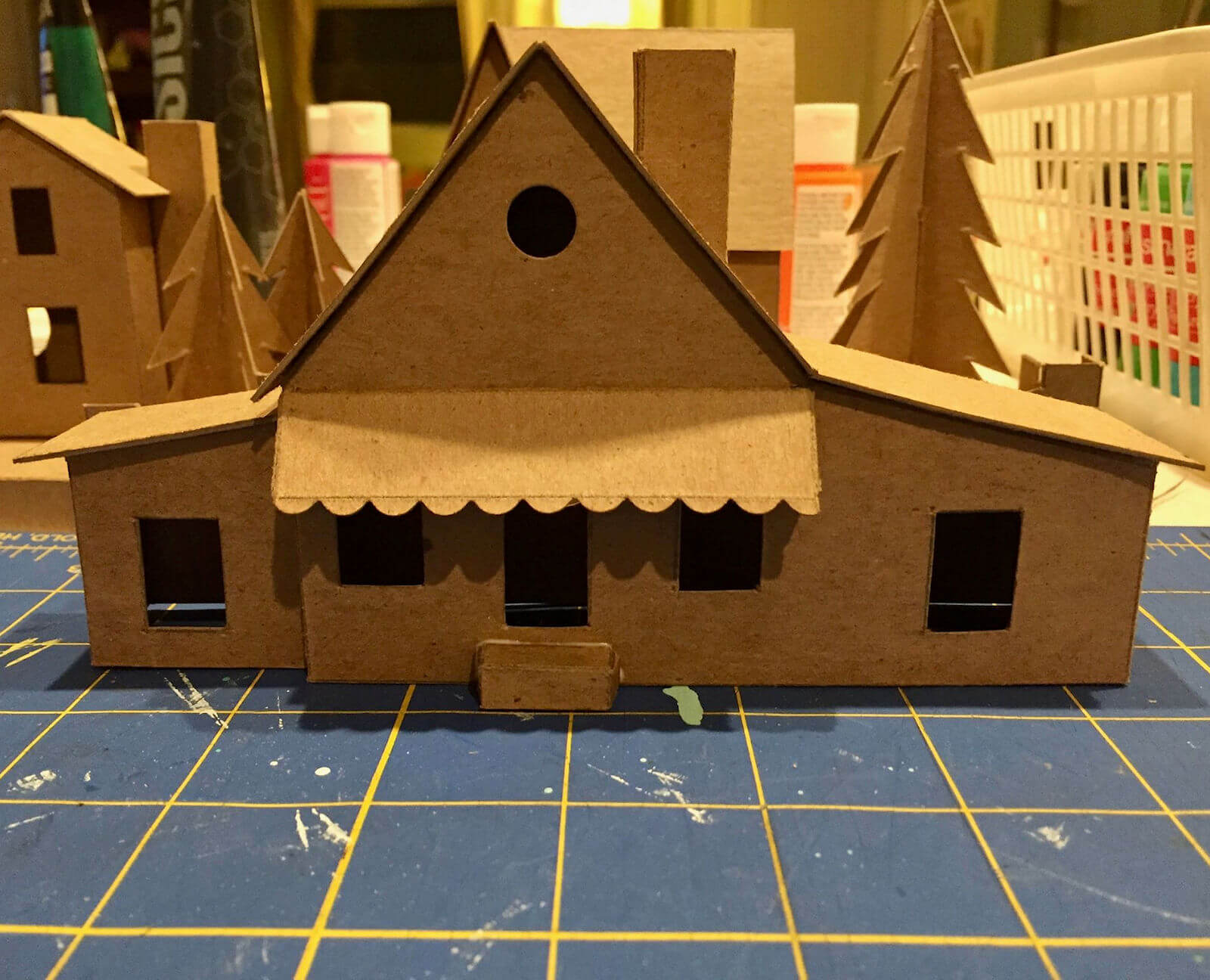 While we are waiting for Steven to design the promised last 4 buildings in his North Pole series, I have started converting the other patterns he has sent me. Steven Leeds designs traditional Putz buildings using CAD and cuts them out of chipboard. He was posting his patterns in PDF form in a Facebook group we both belong to, and people began to ask for his files in SVG format. I volunteered to convert them so they would work in Cricut Design Space, and since Facebook wouldn’t allow me to share SVGs, host the files on my site. I started with the North Pole series as they were the newest, and Steven was very open to feedback on how to design with CAD so that the patterns were easily converted to SVGs. The other set of files Steven sent me (17 in total!) he designed more than two years ago and they are proving to be a bit more challenging. Steven didn’t name this set, so I have called them Glitter Town.

END_OF_DOCUMENT_TOKEN_TO_BE_REPLACED 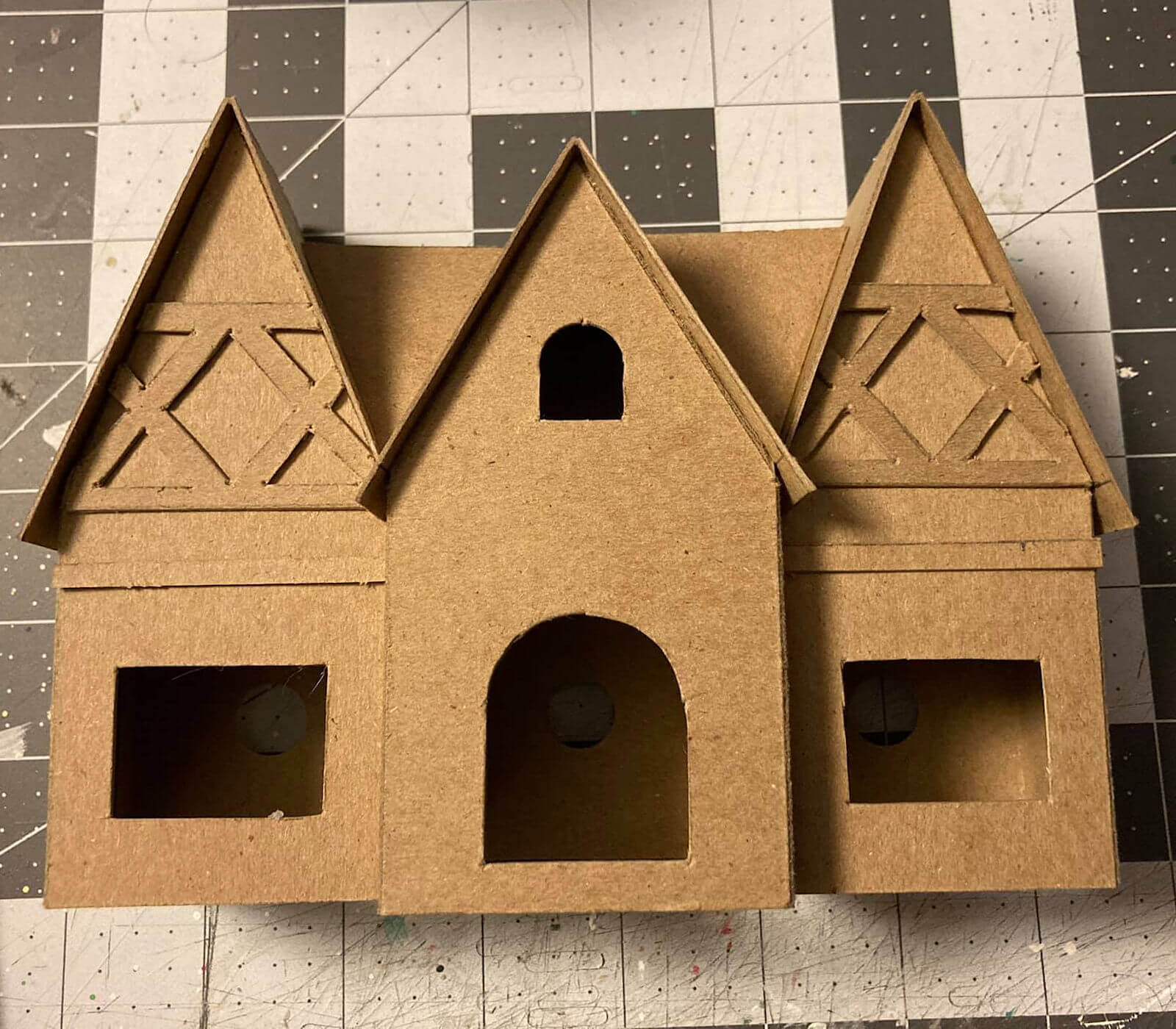 I’ve met another generous designer who is willing to share his designs! Steven Leeds designs traditional Putz buildings using CAD and cuts them out of chipboard. He was posting his patterns in PDF form in a Facebook group we both belong to, and people began to ask for his files in SVG format. I volunteered to convert them so they would work in Cricut Design Space, and since Facebook wouldn’t allow me to share SVGs, host the files on my site. Steven has plans to increase his North Pole Village, and I will add additional patterns into my library when he does.

Steven has given me his permission to change his patterns to resize, add window frames & doors, etc. I will begin to do so as I find the time, of course resizing them to fit with the Tim Holtz Village houses. For each of those I will write a tutorial blog post. I probably won’t modify them all, so if you have a request for a specific building let me know.

END_OF_DOCUMENT_TOKEN_TO_BE_REPLACED 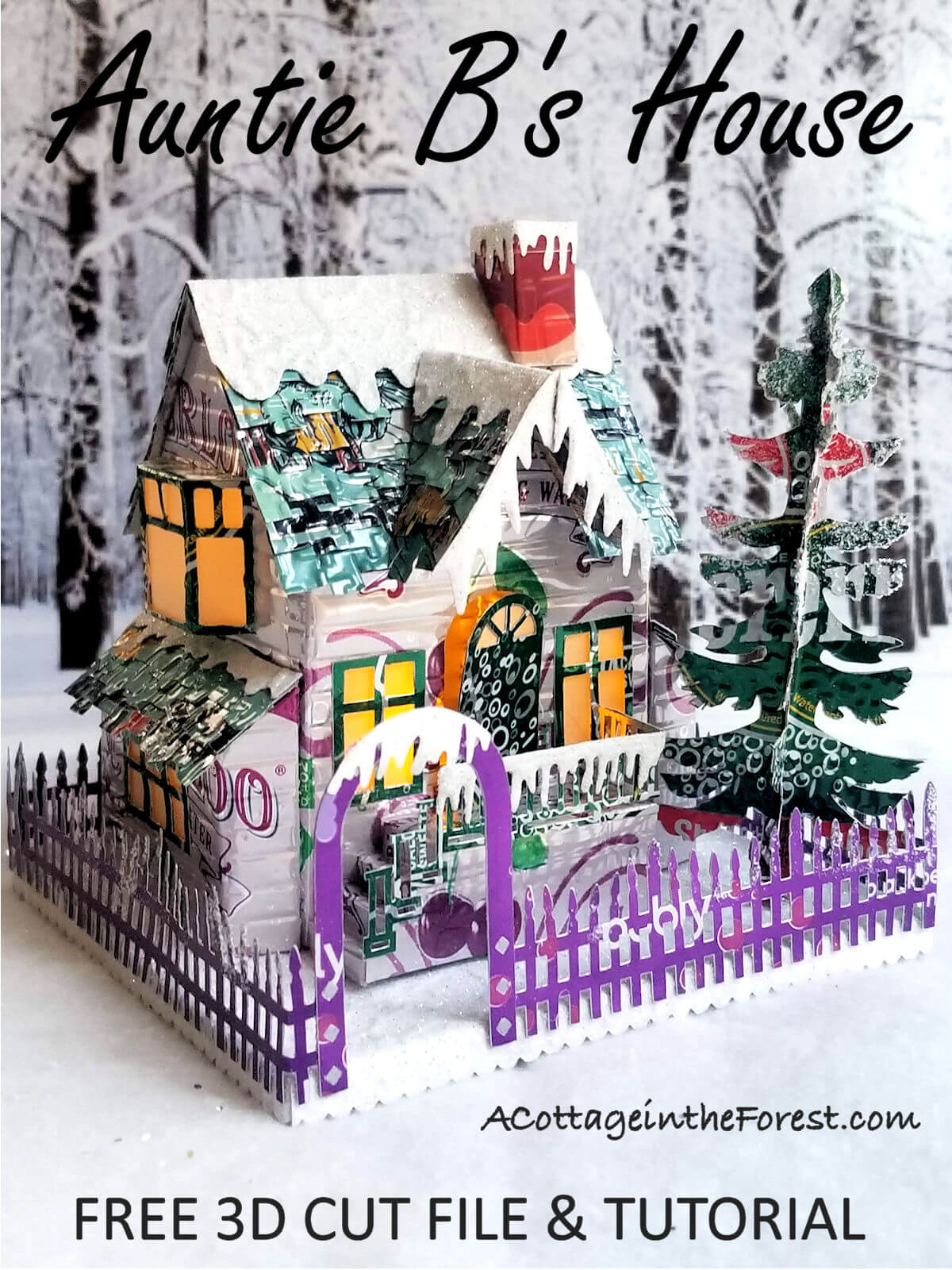 When I started this house I thought to use two of the Tim Holtz village dies I had bought but almost never used – the bay windows of the Village Fixer Upper, and the side addition of the Village Addition. I didn’t get very far before I decided that I wanted taller walls and front stairs, which made the side additions too short, so they had to be replaced. And then I wanted a different window frame style, so decided to replace the bay windows too. Best laid plans and all that. Some day I will use those dies. If you own the Village Fixer Upper and want to use the die, I left the window cutout the size to fit the die, though then the window frames will not match the rest of the house. You could cut off the crossbars of my windows and use the original Tim Holtz window frames if you would prefer. My door, however, I believe is bigger than the one on the Tim Holtz die.

So my simple house became more complex, which is one of the problems I have found with my creations now that I have learned how to design. I may need someone to tap me on the shoulder now and then and rein me back in.

END_OF_DOCUMENT_TOKEN_TO_BE_REPLACED 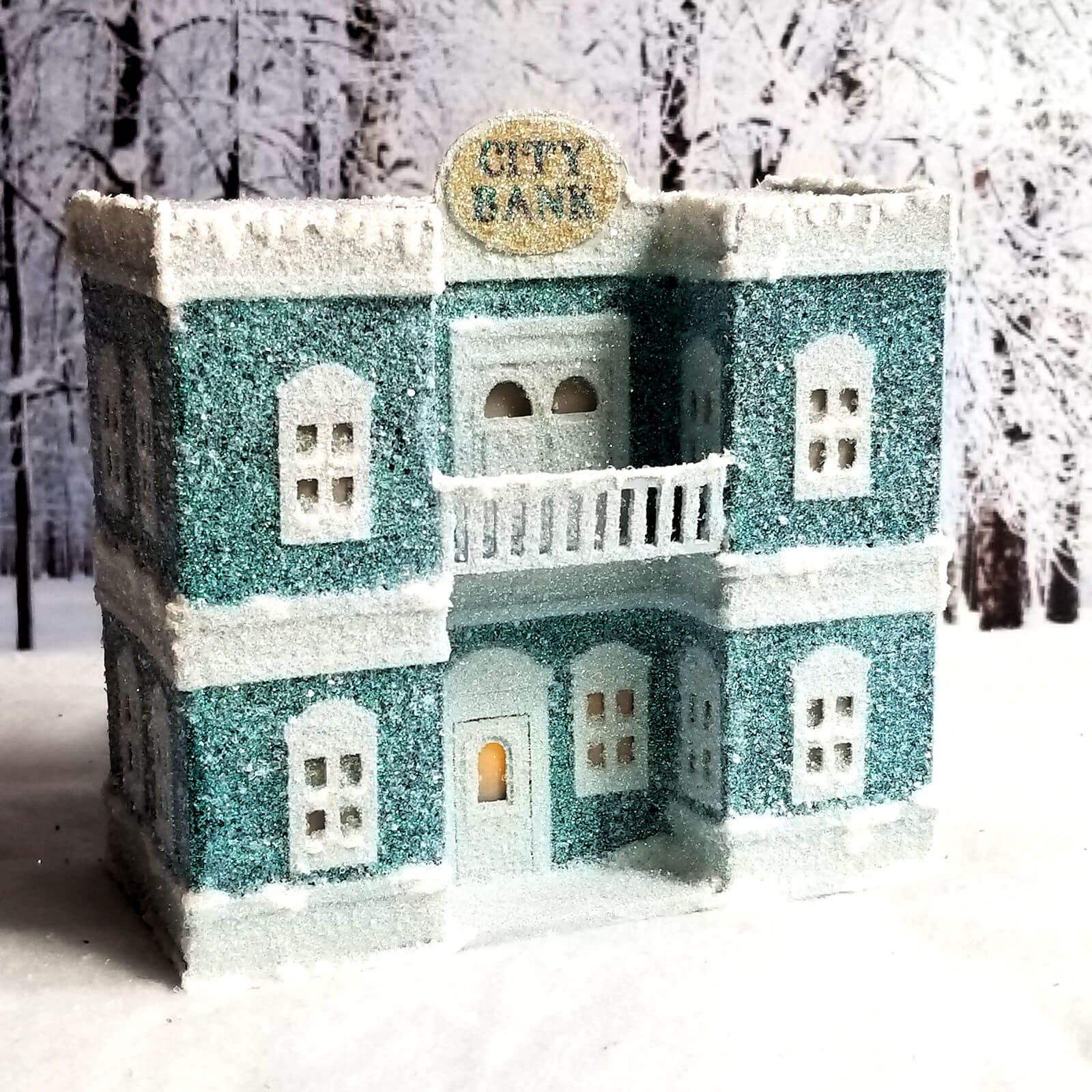 Also, wherein I make my first cardboard house and glitter it! Instructions and supplies on how to glitter your own Putz house below.

A few months ago, I met Teri Hanson of The Covered Chipboard through an online Facebook group. Teri also designs Putz-style buildings, and back in October I reviewed her pattern for the Halloweenie Town Dead Inn. Teri approached me with the idea for a joint venture to produce high quality Putz-style kits for people who do not have cutting machines. Shortly thereafter we decided to also offer SVGs of the patterns for people who want to cut their own. Teri’s vision was for us to take turns to produce original and exclusive patterns that would be different than any of the kits or patterns you can find on Etsy. Thus Putz House Monthly was born. Each month we will take turns designing a house or a shop building. The building will be available for only that month, and then the kit or the pattern will be retired for at least a year. Though each of the kits or patterns can be purchased on a monthly basis, we also offer 3, 6 or 12 month subscriptions. Only with the 12 month subscription can you have access to any of the previous months kits and patterns. At the end of 2021, we will have produced 6 houses and 6 shops that YOU will have built and decorated for your village.